-God have mercy on his soul- 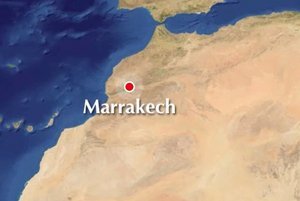 Imam Abdessalam ibn Muhammad ibn Sallām ibn Abdullah (may God have mercy upon him) was born on Monday morning, Rabi’ II 4, 1347 (corresponding to September 20, 1928) in Marrakech, where he grew up. During his attendance at the local school, which was founded by the Muslim scholar and mujahid El Mokhtar Soussi, young Yassine committed himself to, and subsequently succeeded in memorizing the Holy Qur’an. At the tender age of twelve, Abdessalam Yassine learnt the sciences of the Arabic language (including poetry writing) from the disciples of El Mokhtar Soussi. 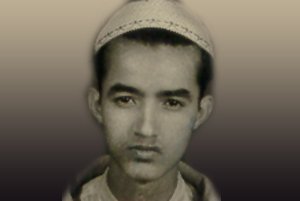 Some time later, Imam Yassine joined the Institute of Ibn Yusuf- the Islamic institute affiliated with the University of al-Qarawiyyīn. During that period, he successfully passed the entrance exam, which, in return, earned him a direct access to the secondary education. Towards the end of that period, Abdessalam Yassine was about 19 years old, and he showed a great interest in learning foreign languages and a passionate fondness for reading a variety of books and journals that came his way.

After passing the Teachers Recruitment Exam, Imam Yassine moved to Rabat. There, he found a favorable opportunity to broaden his intellectual idiosyncratic faculties through communication and contact with diversity of students from different regions. After graduation, he was appointed as a primary-education teacher in the city of al-Jadida, where he moved accompanied by his mother (may God have mercy upon her). As a result of his diligence and learning efforts, he was able to masterly complete, in just a few years, his university studies at the High Institute for Islamic Studies in Rabat. He was then given a post of the Arabic language and translation teacher in Marrakech. His zeal for knowledge and learning did not stop at that level. His brilliant competences to teach and learn, as well as capacity to lead, were recognized and he was, only after three years of teaching, appointed as an Inspector for Primary Education.

Imam Yassine, during his employment at the Ministry of Education, held a number of various educational and administrative offices and responsibilities. His professionalism and moral excellence were remarkable, particularly in the professional and social settings. He was known and respected, for his moral integrity, justice and courage in disclosing the truth, as well as for his great intellectual capacity for learning. 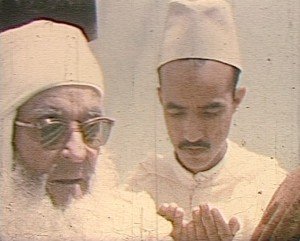 Approaching his middle age, Imam Yassine’s heart witnessed a spiritual awakening that induced in him a state of deep meditation. Thus, existential questions about the truth of the Creation and the Hereafter preoccupied all his thought. To realize that seeking the favors of God does not amount to seeking His Face –Glorified be He, Imam Yassine engrossed himself in worship, dhikr, disciplining the ego, and recitation of the Qur’an for some time. At this decisive moment of his life, he met Sheikh al-Haj al-‘Abbās ibn al-Mukhtār al-Qādiri (may God have mercy upon his soul); the Butshishi Qādiri Sufi master, in whose company he spent some years.

Imam Yassine consequently spent six years in the midst of the Sufi Order, before he switched to calling to the combine of the spiritual education with Jihad. He expressed these thoughts in his two first voluminous books “Islam between the Appeal and the State” (1972) and “Tomorrow Islam!”(1973). These publications had a critical impact on his decision to gradually stop following the way of the Order. Yet, it was his famous open letter, “Islam or the Flood”, addressed to the, then-ruling, king of Morocco Hassan II, that marked a decisive point between the “Sufi Path” and the “Prophetic Method”.

In his open letter Imam Yassine succinctly invited the then-King to repent, and to follow the Islamic teachings and laws in governance. Aiming to urge Hassan II to make the requisite changes, the Imam set forth the historical exemplary model of the rightly-guided Caliph ‘Umar ibn ‘Abdul-Aziz (God be pleased with him). ﴿ The model set to be followed, outlined practical steps; by following which, the ruler demonstrates his credibility with God and before his people﴾ .

As a response to the letter, Imam Yassine was placed in the hospital ward for lung diseases, and later on he was transferred into a mental asylum, where he was detained, without trial, for three years and six months. Albeit the detention and the tribulations, Imam Yassine continued the course of calling people to truth and guidance through giving lessons in mosques and publishing al-Jamā’a [the Movement] periodical which was, afterwards, spitefully banned by the authorities. He resumed communicating and rallying with the activists in the field of calling to God –Glorified be He.

From ‘‘Usrat al-Jamā’a’’ to the Movement of Justice and Spirituality: 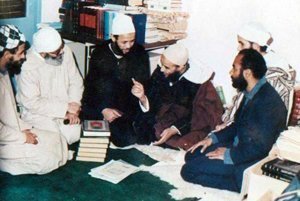 Unfortunately, the initiative he led in person and accompanied by a handful of faithful brothers, who followed him in an attempt to unify the Islamic activism, was met with a chilly reception and lack of interest. Hence, Imam Yassine announced the foundation of the Islamic movement Usrat al-Jamā’a [the Movement’s Founding Body] in 1981 to be part of the Islamic revivalist dynamism.

He, God have mercy on him, exerted immeasurable efforts in setting up the movement and disciplining its members, men and women, on the virtues of iman, action and jihad, and on the foundations of pacifism, nonviolence and openness. Those efforts culminated in 1983 in forming the Association of al-Jamā’a al-Khayriyya, which, in 1987, took the motto of al-‘Adl wal Ihsan [Justice and Spirituality]. Despite the oppression of the State apparatus, Imam Yassine continued, supported by a few preachers and within the framework of legality, the solid construction of the movement at the levels of education, training and organization.

As yet, through its construction, the movement suffered continuous trials and tribulations. On December 27th, 1983, Imam was arrested (on false grounds!), following the publication of the unique number of as-Sobh [the Dawn] journal. In reality the genuine motive for his arrest was the leading article of the 10th issue of al-Jamā’a [the Movement] periodical in July 1982 under the title: “Words Should Be Followed by Deeds: The Royal Letter of The Century in The Eyes of Islam”, in which he criticized the late King Hassan II’s letter addressed to Arab leaders on the 15th centenary of the hegira. 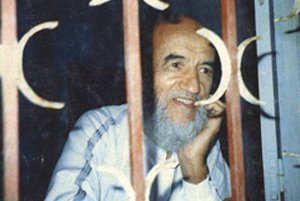 Upon his release in 1985, Imam Yassine resumed his activities on various fronts, which then pushed policymakers to place him under house-arrest in his house in Salé on the 30th of December, 1989, which lasted more than ten years. During this time, he was forbidden to leave his house or even welcome his guests and supporters. Albeit such difficult situation he occupied his time with fasting, remembrance of God, invocation, reading and writing. However, the most significant event at that point in time, was an open letter, “Memorandum To Whom It May Concern” on 28th January, 2000, addressed to the country’s new king – Mohamed VI. In this letter, Imam Yassine is urging the ruler to fear God and to return to the Moroccan people the plundered wealth and their human rights that were violated under the reign of his father. Consequently, the Imam repeated the advice, written previously in “Islam—or the Flood”, by pointing at the king’s obligation to follow the exemplary model of the 5th Caliph ‘Umar ibn ‘Abdul-Aziz (may God be pleased with him).

Resuming the Mission of Calling to God: 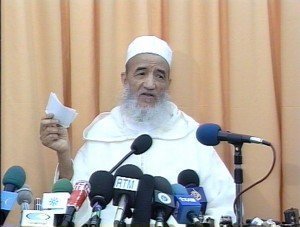 Amid May 2000, the authorities unwillingly lifted the house-arrest. The following day Imam Yassine held a press conference assisted by national and international media, in which he thanked all human rights organizations that had so far supported the call of the movement. He answered the questions of journalists in both Arabic and French.

Over the subsequent weeks, he received visits and letters of congratulation from national and international personalities: intellectuals, scholars, politicians and leaders of Islamic movements. Thousands of delegations of Justice and Spirituality Movement’s members, young, old, men, and women- came consecutively from various cities of Morocco to see him and pay tribute to him.

He also started a nation-wide tour, lasted for weeks, during which he was capable of meeting with disciples and supporters, as well as with the Moroccan public at large.

The presence of the Imam continued to be powerful and influential through the Sunday Meeting [Ziyārat al-Aḥad] which used to be broadcasted directly on the internet and through his wise and gentle companionship of the believing men and women, whose vivid impact was felt in self-disciplining, appeal mission, communication, politics, and knowledge acquisition. 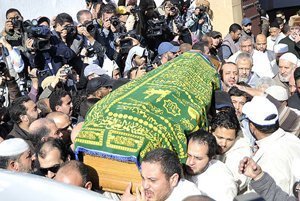 On Thursday, 28th of Muharram 1434, (corresponding to 13 December 2012) Imam Yassine -may God bestow His mercy upon his soul- passed away after a successful lifetime. The remarkable and unprecedented consequence of his personal attributes and his life, besides being illuminated with seeking God’s Face, and alive with rallying people for training their egos, calling to God and availing of scientific knowledge, was that thousands of believing men and women have joined the school and movement of al-‘Adl wal Ihsan in different countries around the world. 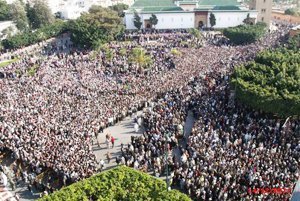 Imam Yassine has bequeathed a testament, both written and recorded, intended for the partisans of the Movement and the entire Muslim community. He wrote it on Sunday, 25th of Dhul Hijja 1422, and was listened to during his funeral on Friday, 29th of Muharram 1434. 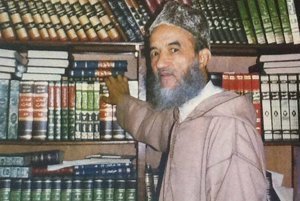 Imam Yassine owed his erudition and prowess to his eagerness to seek knowledge from its diverse sources through persevering and continuous reading of books in all his actions.

In so doing, he started his course of writing with a range of pedagogical works related to the field of education and teaching, including his two books: “On Education” (1963) and “The Pedagogical Texts” (1963). He then moved to Islamic writings, notably his first two books entitled respectively: “Islam between the Appeal and the State” (1972) and “Tomorrow Islam!” (1973) which laid down the fundaments for the project of the theory of “The Prophetic Method [al-Minhāj an-Nabawi]”. It is a dual-purpose project, with its ultimate goal to accompany the individual human being in one’s journey towards His Creator and at the same time mobilizing the potential of the entire umma in favor of the fulfillment of the second heralded Caliphate on the model of the Prophetic method.

Amongst the chief writings are:

The project, however, has never been confined to mere theorizing, rather it is accompanied by sustained pursuit to apply and disseminate it on a very large scale, the fact which has owed the movement a renowned political force in Morocco and a growing number of members both locally and internationally.

This site uses Akismet to reduce spam. Learn how your comment data is processed.